What Are DDR5 Memory Modules?

Random Access Memory (RAM) is where data is stored while the PC is turned on, i.e., in the short term. The CPU needs certain information to do its job, and this info is stored in RAM, either as it’s pulled as needed from long-term storage like solid state drives (SSDs) or hard disk drives (HDDs), or generated by the CPU.

Memory speed is measured in frequency, and it’s vital because it helps determine how fast the CPU can operate. If the memory is slow, it won’t matter how fast the CPU is because it will be forced to wait for information rather than functioning to keep the computer running at optimal speed.

An Overview of DDR5 Memory Modules 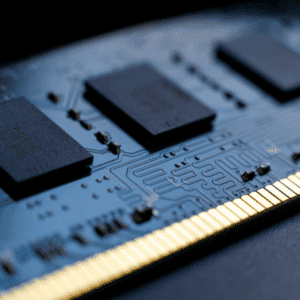 Double Data Rate or DDR means the memory can communicate data at twice the speed of single data rate memory. For several generations now, DDR has been the industry standard. As you may already know DDR4 is the natural predecessor of DDR5. The full name of the memory is DDR SDRAM (Synchronous Dynamic Random-Access Memory).

Now DDR5 memory modules have several new updates compared to DDR4, the biggest one being the performance. DDR4 started out functioning at a frequency of 800 MHz (megahertz) at a double data rate or 1,600 MHz. This was known as DDR-1600. Its maximum capacity was 3,200 MHz (DDR4-3200).

With DDR5 memory modules, there will also be an increase in speed over time, which means tremendously faster raw performance compared to DDR4.

DDR5 also uses less power than DDR4. To be more precise, DDR5 draws 1.1 volts while DDR4 draws 1.2 volts. That may not sound like a big difference, but it is considered significant in terms of power.

DDR5 will also come in larger capacities, starting from 8 gigabit (GB) modules to all the way to 32 GB. That’s essentially twice the capacity of DDR4 which are available in 4Gb to 16Gb. The size of the RAM chips that are installed in a computer is determined by these modules.

In other words, DDR5 memory modules mean double the memory capacity. It is estimated that up to 128 GB DDR5 RAM chips could enter the market, allowing gigantic amounts of memory compared to modern PCs.

Last but not least, desktop DDR5 RAM will also feature error-correcting code (ECC) on chip, which has only been available for server memory until now. This will enhance the reliability of memory by minimizing errors and increasing the consistency of applications by up to 20 times compared to DDR4.

While DDR5 memory modules represent an incredible advance in PC memory, it will be a while until it becomes available. Accelerated Memory Production Inc.’s DDR4 DRAM modules are designed to work like a beast in harsh environments, including extreme temperatures.

Our DDR4 modules are available in several different configurations to meet the needs of a wide range of industries. To learn more about AMP Inc’s extensive range of products and offerings, call us at 714-460-9800 or write to us online.

Message to our customer: During the Covid 19 pandemic, we are still working hard to support our customer while adhering to safety guideline from authority to ensure the safety of our employees. Thank you for your business, we are privileged to have you as a customer and we hope that you and those around you remain safe during this unprecedented situation. Dismiss