Solid State Drives (SSDs) are used to store data and they have a stronger resistance to physical shocks compared with the electromechanical drives. They also run much more quietly and have lower latency and quicker access time.

A solid state drive is made up of a storage unit (DRAM chip or NAND Flash chip), a control unit, an interface, and an optional cache unit. You know that Solid State Drives (SSDs) are often used to store data, but do you know there are different types of SSDs? Generally, SSDs can be classified based on 2 factors: interface and memory.

In this post, let’s look at the best performing SSDs that are used in different industries based on the interface. 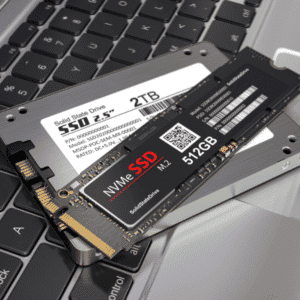 This is the most common type of solid state drive. Serial ATA (SATA) is a kind of connection interface that is used by SSDs to relay data to the system. If you have a SATA SSD, you can be assured that it can be used with any computer – laptop or desktop – no matter how old it is.

SATA features a speed grade; you may have noticed SATA 3 and SATA 2 in SSDs considered for use (known as SATA III/SATA 6Gbps or SATA II/SATA 3Gbps respectively). These refer to the maximum available data transfer rate of the SSD, given that it is installed in a computer that has a SATA interface that is compatible with the same standard.SATA 3.0 is considered the most versatile kind of SSD these days thanks to its transfer speed of 750MB/s (6Gb/s). However, its actual transfer speed is 4.8Gb/s since some physical overhead always occurs when you encode the data to be transferred.

Previously known as Next Generation Form Factor (NGFF), M.2 SSDs are essentially tiny circuit boards made up of controller chips and flash memory. These solid state drives look very similar to RAM but they are way smaller.

This is a SSD hard drive and is connected to a computer system using a Peripheral Component Interconnect Express (PCIe) interface. This one has become a popular way to enhance the speed of SSDs to storage devices and servers.

Looking for custom-configure solid state drives to fit specialized requirements in endurance, thermal, encryption and other configurations? Accelerated Memory Production, Inc. can help. Customization is our specialty – thanks to our 14+ years of experience as a true manufacturer in compliance with AS9100D, we have absolute control over production, design, and supply of our products.

Regardless of how specialized your organization’s requirements are, we are fully capable of meeting and exceeding them. To know more about AMP Inc.’s extensive range of products and offerings, call us at 714-460-9800 or fill out this contact form.

We use cookies on our website to give you the most relevant experience by remembering your preferences and repeat visits. By clicking “Accept”, you consent to the use of ALL the cookies.
Cookie settingsACCEPT
Manage consent

This website uses cookies to improve your experience while you navigate through the website. Out of these, the cookies that are categorized as necessary are stored on your browser as they are essential for the working of basic functionalities of the website. We also use third-party cookies that help us analyze and understand how you use this website. These cookies will be stored in your browser only with your consent. You also have the option to opt-out of these cookies. But opting out of some of these cookies may affect your browsing experience.
Necessary Always Enabled
Necessary cookies are absolutely essential for the website to function properly. These cookies ensure basic functionalities and security features of the website, anonymously.
Functional
Functional cookies help to perform certain functionalities like sharing the content of the website on social media platforms, collect feedbacks, and other third-party features.
Performance
Performance cookies are used to understand and analyze the key performance indexes of the website which helps in delivering a better user experience for the visitors.
Analytics
Analytical cookies are used to understand how visitors interact with the website. These cookies help provide information on metrics the number of visitors, bounce rate, traffic source, etc.
Advertisement
Advertisement cookies are used to provide visitors with relevant ads and marketing campaigns. These cookies track visitors across websites and collect information to provide customized ads.
Others
Other uncategorized cookies are those that are being analyzed and have not been classified into a category as yet.
SAVE & ACCEPT

Message to our customer:During the Covid 19 pandemic, we are still working hard to support our customer while adhering to safety guideline from authority to ensure the safety of our employees. Thank you for your business, we are privileged to have you as a customer and we hope that you and those around you remain safe during this unprecedented situation. Dismiss